Posted on 25 January 2012 by Allen Fleishman 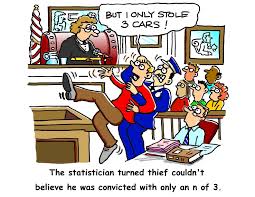 Are the results from small, but statistically significant, studies credible?

One of the American Statistical Association’s sub-sections is for Statistical Consultants.  A short time ago, there were over fifty comments on the topic of ‘Does small sample size really affect interpretation of p-values?’  The motivation came from a statistician who went to a conference where “During the discussion period a well-known statistician suggested that p-values are not as trustworthy when the sample size is small and presumably the study is underpowered. Do you agree?  The way I see it a p-value of 0.01 for a sample size of 20 is the same as a p-value of 0.01 for a sample of size 500.  …  I would like to hear other points of view.”

More often than not, having small sample size would preclude achieving significance (see my blogs on ‘1. Statistics Dirty Little Secret’ and ‘8. What is a Power Analysis?’).  When N is small, only very large effects could be statistically significant.  In this case, it was assumed that the p-value achieved ‘statistical significance’, p < 0.01. There was considerable discussion.

Many statisticians felt that the small sample size (e.g., 20) would not be large enough to test various statistical assumptions.  For example, to test for normality typically takes hundreds of observations.  A sample size of 20 lacks power to test normality, even when the distribution were quite skewed.  So, even though the p-value was ‘significant’, the test of assumptions are not possible, hence the p-value is less credible. Or worse, if the data were actually non-normal and the sample size is small, the t-test is not appropriate.  Hence the p-value is not appropriate.

Other statisticians observed that when N is small, the deletion of a single patient’s data can often reverse the ‘statistically significant’ conclusion.  Thus the result, when N is small, is quite ‘fragile’, not very generalizable.

BTW, the statistician who initially asked the question changed his mind and is now leaning on the side of being a bit more hesitant in believing the ‘statistically significant’ p-value when the N is small.

What do I conclude?  Same as I’ve been saying all along.

My next blog will discuss multiple observations and statistical ‘cheapies’.